Fun in the sun? Does ‘tanorexia’ (addiction to sunshine) really exist?

If the many media reports are to be believed, a 2014 study published in the journal Cell claimed that “sunshine can be addictive like heroin”. In an experiment carried out on mice, a research team led by Dr. Gillian Fell at the Harvard Medical School in Boston (US) reported that ultraviolet exposure leads to elevated endorphin levels (endorphins being the body’s own ‘feel good’ endogenous morphine), that mice experience withdrawal effects after exposure to ultraviolet light, and that chronic ultraviolet causes dependency and ‘addiction-like’ behaviour.

Although the study was carried out on animals, the authors speculated that their findings may help to explain why we love lying in the sun and that in addition to topping up our tans, sunbathing may be the most natural way to satisfy our cravings for a ‘sunshine fix’ in the same way that drug addicts yearn for their drug of choice.

Reading the findings of this study took me back to 1998 when I appeared as a ‘behavioural addiction expert’ on Esther Rantzen’s daytime BBC television show that featured people who claimed they were addicted to tanning (and was dubbed by the researchers on the programme as ‘tanorexia’). I have to admit that none of the case studies on the show appeared to be addicted to tanning at least based on my own behavioural addiction criteria (i.e., salience, mood modification, tolerance, withdrawal, conflict, and relapse) but it did at least alert me to the fact that some people thought sunbathing and tanning was addictive (in fact, the people on the show said their excessive tanning was akin to nicotine addiction). 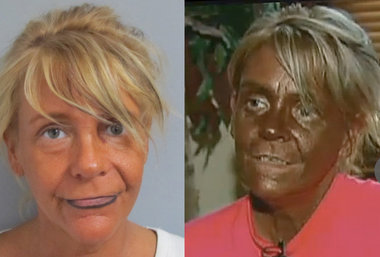 There certainly appeared to be some similarities between the people interviewed and nicotine addiction in the sense that the ‘tanorexics’ knew they were significantly increasing their chances of getting skin cancer as a direct result of their risky behaviour but felt they were unable to stop doing it (similar to nicotine addicts who know they are increasing the probability of various cancers but also feel unable to stop despite knowing the health risks).

Since then, tanorexia has become a topic for scientific investigation (and I looked at the topic in a previous blog). For instance, in a 2006 study published in the Journal of the American Academy of Dermatology by Dr. Mandeep Kaur and colleagues reported that frequent tanners (those who tanned 8-15 times a month) that took an endorphin blocker normally used to treat drug addictions (i.e., naltrexone) significantly reduced the amount of tanning compared to a control group of light tanners.

A 2005 study published in the Archives of Dermatology by Dr. Molly Warthan and colleagues claimed that a quarter of the sample of 145 “sun worshippers” would qualify as having a substance-related disorder if ultraviolet light was classed as the substance they crave. Their paper also reported that frequent tanners experienced a “loss of control” over their tanning schedule, and displayed a pattern of addiction similar to smokers and alcoholics.

A 2008 study published in the American Journal of Health Behavior by Dr. Carolyn Heckman and colleagues reported that 27% of 400 students they surveyed were classified as “tanning dependent”. The authors claimed that those classed as being tanning dependent had a number of similarities to substance use, including (i) higher prevalence among youth, (ii) an initial perception that the behaviour is image enhancing, (iii) high health risks and disregard for warnings about those risks, and (iv) the activity being mood enhancing.

Another study by Dr. Heckman and her colleagues in the American Journal of Health Promotion surveyed 306 female students and classed 25% of the respondents as ‘tanning dependent’ based upon a self-devised tanning dependence questionnaire. The problem with this and most of the psychological research on tanorexia to date is that almost all of the research is carried out on relatively small convenience samples using self-report and non-psychometrically validated ‘tanning addiction’ instruments.

Based on my own six criteria of behavioural addiction although some studies suggest some of these criteria appear to have been met, I have yet to be convinced that any of the published studies to date show genuine addiction to tanning (i.e., that there is evidence of all my criteria being endorsed) but that doesn’t mean it’s not theoretically possible. However, I’ve just done a study on tanorexia with my research colleagues at the University of Bergen and when we publish our findings I’ll be sure to let my blog readers know about it.

(Please note: A version of this article first appeared in The Conversation and The Washington Post)

Griffiths, M.D. (2014). Sunshine addiction is a hot topic – but does ‘tanorexia’ really exist? The Conversation. June 20. Located at: https://theconversation.com/sunshine-addiction-is-a-hot-topic-but-does-tanorexia-really-exist-28283