← The wows of brows: Eyebrow fetishes and the naming of a new paraphilia
The born identity: Can online gaming help people with gender dysphoria? →

Earlier this year, I was contacted by a BBC reporter asking me what the latest research on ‘news addiction’ was. I politely told him I was unaware of any such research and that if ‘news addiction’ existed, it would be more akin to ‘television addiction’ or ‘boxset bingeing’. About a month after that call, a paper on ‘news addiction’ was published in the Journal of the Dow University of Health Sciences Karachi by Pakistani psychologists Ghulam Ishaq, Rafia Rafique, and Muhammad Asif.

I have to admit that some might say I’m a bit of a ‘news junkie’. As soon as I get up in the morning or as soon as I come home from work I switch on the radio or television to listen to the news. However, I do not consider my love of listening to the news to be an addiction, and I suspect most people like me wouldn’t either. Of course, there are now other ways for individuals to get their ‘news fix’ including thousands of online news sites and via social media which is why Ishaq and his colleagues decided to look at the construct of ‘news addiction’. They claimed that:

“People are persuaded towards news. Similarly, engrossment of certain individuals in any domain from politics, sports, global issues, arson or terrorism can also promote news habituation or addiction and intensify inspection towards news. News addiction comes under the term behavioral-related behavior…When somebody interacts with news, this gives him/her satisfying feelings and sensations that he/she is not able to get in other ways. The reinforcement an individual gets from these feelings compels him to repeat their behavior to get these types of feelings and sensations repeatedly… eventually causing a disturbance in every sphere of life… individuals who are addicted to news feel themselves much obsessed to check the news in uncontrollable ways”. 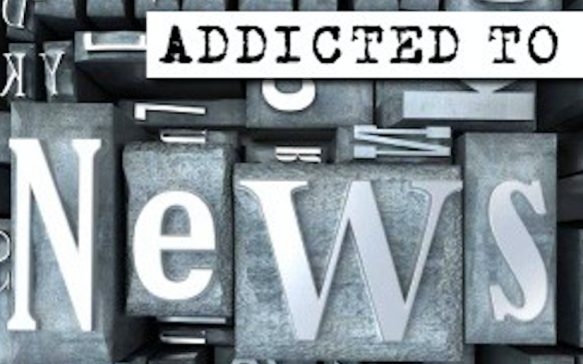 Theoretically there is no reason why individuals cannot be addicted to reading and/or listening to the news as long as they are being constantly rewarded for their behaviour. In fact, the authors used some of my papers on behavioural addiction more generally to argue for the construct of ‘news addiction’ as a construct to be empirically investigated. In their study, Ishaq and colleagues wanted to examine the relationship between (the personality construct of) conscientiousness, neuroticism, self-control, and news addiction. Conscientiousness is a personality trait and refers to individuals who are orderly, careful, and well organised. Neuroticism is another major personality trait and refers to individuals who have high mental instability such as depression and high anxiety. The researchers hypothesised that there would be negative correlation between conscientiousness and news addiction, and that neuroticism would be positively correlated with news addiction.

To test their hypotheses, a survey was completed by 300 participants (aged 18 to 60 years; average age 39 years) from major cities of the Punjab (Lahore, Multan, Bahawalpur, Faisalabad, Sargodha). The authors developed their own 19-item News Addiction Scale (NAS) although the paper didn’t give any examples of any of the items in the NAS. They also administered the ‘Big Five Inventory’ (which assesses five major personality traits – Openness, Conscientiousness, Extraversion, Agreeableness, and Neuroticism). The study found that the hypotheses were supported (i.e., news addiction was positively correlated with neuroticism and negatively correlated with conscientiousness. Previous literature has consistently shown that there is relationship between personality traits and behavioural addiction. The findings of this study are very similar to those more widely in the general literature for both substance and behavioural addictions (which also show most addictions have a low correlation with conscientiousness and a high correlation with neuroticism). The authors also argued that:

“(The findings show that) self-control plays an active role [in] refraining from the instant pleasure of impulse that would hinder with daily functioning and attainment goals…[The] current study findings demonstrated that self-control acts as a mediating variable between conscientiousness, neuroticism and news addiction”.

There was no mention at all in the paper about how their participants accessed their news. I access most (but certainly not all) of my news via television and therefore if I was watching an abnormal amount of news on the television, this would more likely be a sub-type of television addiction or a sub-type of television binge-watcher (both of which have been reported in the psychological literature). If someone addictively accessed all their news online or via social media, this could perhaps come under more general umbrella terms such as ‘internet addiction’ or ‘social media addiction’.

However, things are further complicated by the fact that ‘news’ can be defined in a number of ways. In the study by Ishaq and colleagues, news was defined as a “statement of specific information and facts and figures on any substantial event” but such a definition doesn’t take into account such things as political opinions and nor does it define what a ‘substantial event’ is. Given that this is the only study on news addiction that I am aware of, I’ll need a lot more research evidence before I am convinced that it really exists.

Orosz, G., Vallerand, R. J., Bőthe, B., Tóth-Király, I., & Paskuj, B. (2016). On the correlates of passion for screen-based behaviors: The case of impulsivity and the problematic and non-problematic Facebook use and TV series watching. Personality and Individual Differences, 101, 167-176.

Professor MARK GRIFFITHS, BSc, PhD, CPsychol, PGDipHE, FBPsS, FRSA, AcSS. Dr. Mark Griffiths is a Chartered Psychologist and Distinguished Professor of Behavioural Addiction at the Nottingham Trent University, and Director of the International Gaming Research Unit. He is internationally known for his work into gambling and gaming addictions and has won many awards including the American 1994 John Rosecrance Research Prize for “outstanding scholarly contributions to the field of gambling research”, the 1998 European CELEJ Prize for best paper on gambling, the 2003 Canadian International Excellence Award for “outstanding contributions to the prevention of problem gambling and the practice of responsible gambling” and a North American 2006 Lifetime Achievement Award For Contributions To The Field Of Youth Gambling “in recognition of his dedication, leadership, and pioneering contributions to the field of youth gambling”. In 2013, he was given the Lifetime Research Award from the US National Council on Problem Gambling. He has published over 800 research papers, five books, over 150 book chapters, and over 1500 other articles. He has served on numerous national and international committees (e.g. BPS Council, BPS Social Psychology Section, Society for the Study of Gambling, Gamblers Anonymous General Services Board, National Council on Gambling etc.) and is a former National Chair of Gamcare. He also does a lot of freelance journalism and has appeared on over 3500 radio and television programmes since 1988. In 2004 he was awarded the Joseph Lister Prize for Social Sciences by the British Association for the Advancement of Science for being one of the UK’s “outstanding scientific communicators”. His awards also include the 2006 Excellence in the Teaching of Psychology Award by the British Psychological Society and the British Psychological Society Fellowship Award for “exceptional contributions to psychology”.
View all posts by drmarkgriffiths »

← The wows of brows: Eyebrow fetishes and the naming of a new paraphilia
The born identity: Can online gaming help people with gender dysphoria? →