← Blocking out the pain: Tetris, trauma, and Game Transfer Phenomena
The night stuff: A very brief look at nyctophilia and scotophilia →

Recently, I did an interview with a journalist about ‘love bombing’ described by her as a new phenomenon occurring in online dating and is “when someone showers you with attention, promising the world but when you respond they go cold and stop responding”. However, there is nothing new about ‘love bombing’ because the term has been around since the 1970s except it has traditionally been described as a practice by religious organisations and cults in relation to the indoctrination of new recruits. According to a number of different sources, the term ‘love bombing’ was coined by the Unification Church of the United States founded by Sun Myung Moon (and why individuals in the cult are often referred to as ‘Moonies’). A number of academics have written about ‘love bombing’ within cult movements. For instance, Thomas Robbins in a 1984 issue of the journal Social Analysis noted that:

“Many elements involved in controversies over alleged cultist brainwashing entail trans-valuational conflicts related to alternative internal vs. external perspectives. The display of affection toward new and potential converts (‘love bombing’), which might be interpreted as a kindness or an idealistic manifestation of devotees’ belief that their relationship to spiritual truth and divine love enables them to radiate love and win others to truth, is also commonly interpreted as a sinister ‘coercive’ technique (Singer, 1977)”. 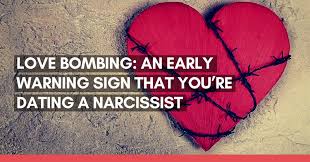 In a 2002 issue of the journal Human Relations, Dennis Tourish and Ashly Pinnington wrote that the practice of ‘love bombing’ is derived from the interpersonal perception literature and is a form of ‘ingratiation’ (taken from Edward Jones’ 1964 book of the same name). They then cite from Jones’ 1990 book Interpersonal Perception:

“There is little secret or surprise in the contention that we like people who agree with us, who say nice things about us, who seem to possess such positive attributes as warmth, understanding, and compassion, and who would ‘go out of their way’ to do things for us”.

Tourish again (this time with Naheed Vatcha) in a 2005 issue of the journal Leadership noted that cults use ‘love bombing’ as an emotionally draining recruitment strategy and that it is a form of positive reinforcement. More specifically, they noted that:

“Cults make great ceremony of showing individual consideration for their members. One of the most commonly cited cult recruitment techniques is generally known as ‘love bombing’ (Hassan, 1988). Prospective recruits are showered with attention, which expands to affection and then often grows into a plausible simulation of love. This is the courtship phase of the recruitment ritual. The leader wishes to seduce the new recruit into the organization’s embrace, slowly habituating them to its strange rituals and complex belief systems. At this early stage resistance will be at its highest. Individual consideration is a perfect means to overcome it, by blurring the distinctions between personal relationships, theoretical constructs and bizarre behaviors”.

More recently, the practice of ‘love bombing’ has been used in other contexts such by gang leaders or pimps as a way of controlling their victims (as outlined in the 2009 book Gangs and Girls: Understanding Juvenile Prostitution by Michel Dorais and Patrice Corriveau), and within the context of everyday dating and online dating. One article that has been cited a lot in the press relating to the use of ‘love bombing’ in day-to-day relationships is a populist article written for Psychology Today by Dr. Dale Archer. He noted that:

Dr. Archer says that ‘love bombing’ works because “humans have a natural need to feel good about who we are, and often we can’t fill this need on our own”. He says that there are times of high susceptibility to being ‘love bombed’ such as losing a job or going through a divorce. Irrespective of why or where the susceptibility has arisen, Archer claims that love bombers “are experts at detecting low self-esteem, and exploiting it”. He then goes on to claim that:

“The paradox of love bombing is that people who use it aren’t always seeking targets that broadcast insecurity for all to see. On the contrary, the love bomber is also insecure, so to boost their ego, the target must at least seem like a great “catch.” Maybe she’s the beautiful woman, who’s lonely because her beauty intimidates people, or he’s the guy with the great career whose wife left him for his best friend, or she’s the hard-nosed businesswoman, who’s avoided marriage and motherhood because her childhood was so traumatic. On paper, these folks are attractive, but something makes them doubt their own value. Along comes the love bomber to shower them with affection and attention. The dopamine rush of the new romance is vastly more powerful than it would be if the target had a healthy self-esteem, because the love bomber fills a need the target can’t fill on her own”.

My own expertise on ‘love bombing’ is limited (to say the least). However, I did attempt to answer the questions I was asked, and here are my verbatim replies.

It seems like [‘love bombing’] quite an addictive and compulsive behaviour – what do you make of it?

Are there any psychological reasons why people behave like this?

I don’t know of any psychological research that has been done on love bombing but the concept is not new as it has been in the academic literature since the 1970s in relation to indoctrinating individuals into religious cults. Love bombing is a manipulative strategy to make individuals more emotionally pliable. My guess is that in a relationship setting (rather than a cult setting) the individuals engaged in love bombing are likely to be egomaniacs and/or narcissists who like to feel dominant and powerful and/or love psychologically humiliating others.

In my experience, and according to some of the people I’ve interviewed who are guilty of ‘love bombing’ – they do it to multiple people at once.

If love bombing is part of an individual’s behavioural repertoire there is no reason why they wouldn’t do it with more than one person at the same time. However, I don’t know of any research that has shown this to be the case but it wouldn’t surprise me if some individuals were unfaithful love bombers (but I’m sure there are serial love bombers who just do it from one relationship to the next without being physically or emotionally unfaithful).

Is it to straightforward to blame tech for such behaviours – is it just an amplification of behaviours people already exhibit in real life? The temptation always seems to be to blame it on the internet.

The internet tends to facilitate pre-existing problematic behaviour rather than cause it. However, it is well known that the internet is a disinhibiting medium and that individuals lower their psychological guard online. In the case of relationships, the perceived anonymity of being online means that individuals reveal things about themselves, often very private things, because the medium is non-face-to-face, non-threatening, non-alienating and non-stigmatising. Individuals can develop deep emotional relationships online without even having met the other person because of the internet’s disinhibiting properties. Consequently, online methods of communication are another tool in love bomber’s armoury in (initially) showering their professed love for somebody and can happen 24/7 (something which couldn’t have happened in the days prior to online ubiquity).

Where and how, if at all, does this sort of problematic behaviour intersect with sex and love addiction?

I don’t see any overlaps between ‘love bombing’ and sex addiction as they are two completely different constructs and have completely different underlying motivations with little in the way of crossover. Obviously, love bombing could be used as a method to increase the likelihood of sex (because flattery goes a long way). However, if the ultimate goal is psychological control of another person’s emotions, sex is simply a by-product of love bombing rather than the main goal.

As far as I can tell, there has never been any empirical research on ‘love bombing’ within the context of dating so all my responses to the questions I was asked are speculative. However, I do think this is an area that would benefit from scientific investigation given how important personal relationships are within our lives. At the very least such research might uncover the signs and strategies that ‘love bombers’ typically use and might prevent a lot of emotional pain felt by individuals not rushing head first (or should that be heart first?) into such relationships in the first place.

Tourish, D., & Pinnington, A. (2002). Transformational leadership, corporate cultism and the spirituality paradigm: An unholy trinity in the workplace? Human Relations, 55(2), 147-172.

Tourish, D., & Vatcha, N. (2005). Charismatic leadership and corporate cultism at Enron: The elimination of dissent, the promotion of conformity and organizational collapse. Leadership, 1(4), 455-480.

Professor MARK GRIFFITHS, BSc, PhD, CPsychol, PGDipHE, FBPsS, FRSA, AcSS. Dr. Mark Griffiths is a Chartered Psychologist and Distinguished Professor of Behavioural Addiction at the Nottingham Trent University, and Director of the International Gaming Research Unit. He is internationally known for his work into gambling and gaming addictions and has won many awards including the American 1994 John Rosecrance Research Prize for “outstanding scholarly contributions to the field of gambling research”, the 1998 European CELEJ Prize for best paper on gambling, the 2003 Canadian International Excellence Award for “outstanding contributions to the prevention of problem gambling and the practice of responsible gambling” and a North American 2006 Lifetime Achievement Award For Contributions To The Field Of Youth Gambling “in recognition of his dedication, leadership, and pioneering contributions to the field of youth gambling”. In 2013, he was given the Lifetime Research Award from the US National Council on Problem Gambling. He has published over 800 research papers, five books, over 150 book chapters, and over 1500 other articles. He has served on numerous national and international committees (e.g. BPS Council, BPS Social Psychology Section, Society for the Study of Gambling, Gamblers Anonymous General Services Board, National Council on Gambling etc.) and is a former National Chair of Gamcare. He also does a lot of freelance journalism and has appeared on over 3500 radio and television programmes since 1988. In 2004 he was awarded the Joseph Lister Prize for Social Sciences by the British Association for the Advancement of Science for being one of the UK’s “outstanding scientific communicators”. His awards also include the 2006 Excellence in the Teaching of Psychology Award by the British Psychological Society and the British Psychological Society Fellowship Award for “exceptional contributions to psychology”.
View all posts by drmarkgriffiths »

← Blocking out the pain: Tetris, trauma, and Game Transfer Phenomena
The night stuff: A very brief look at nyctophilia and scotophilia →